Here are pictures of my grandparents on my dad’s side:

These pictures are from a locket they had made. It is the only photo we have of my grandmother. 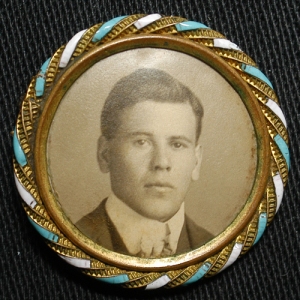 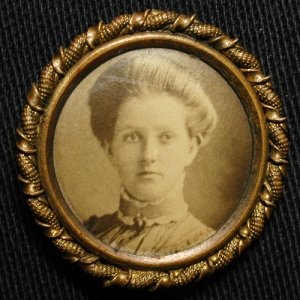 Grandpa grew up at Grand Tower IL (a place that Ken Steinhoff has published a book about) He has also written many articles & posted photos of Tower Rock on his blog. Here is a link to a list of those articles<<Cape Central – Tower Rock Articles>>

Grandma grew up in a town across the river from Grand Tower called Wittenberg MO. I am told that there was a ferry that brought people back & forth from Grand Tower to the Missouri side of the river. I am not sure how they met but I have a possible theory.

Back in those days Grand Tower was actually a growing & busy community with a lot of jobs available. That is the reason my great grandfather, Louis Calvin ‘Cal’ Yow, decided to locate there to raise his family. (More on him later)

I visited Grand Tower several years ago & it is no longer a growing community; quite the opposite. I did meet some interesting people while I was there. The place looked somewhat like a ghost-town and I wanted to ask questions about my ancestors, so I went into the first place that looked occupied, the Post Office. There was a woman there who was happy to help me in my search. She was kind of like the one-woman postal clerk, welcoming committee, maybe mayor? (not really, but you get my drift) She did happen to also be the one in charge of upkeep of the cemeteries and she had the cemetery records which she happily gave me. I was able to locate some grave markers with family names on them but I was not able to find out how they were related. With a name like Yow, they had to be relatives. I took photos of the markers and maybe someday I will figure it out.

The lady in the post office also told me some of the history she knew of Grand Tower. Back in the ‘good times’, Grand Tower was a gathering place for outdoor social events. The ladies came over on the ferry from Missouri in their beautiful long dresses and hats and, of course, the young men in the town were eagerly awaiting their arrival. I have a suspicion that maybe that is how my grandparents met, but I don’t know that for a fact. It does make a nice romantic story though so that is how I choose to think of it.

Anyway, however they met, they married in 1905 and moved to Cape to live & raise a family. They had 5 children. All but one died in infancy. One was old enough to say Mama. My dad is the only child who survived. They all had a stomach ailment which my dad also had when he was born. Naturally, he was spoiled; never allowed to cry since they didn’t know if he was going to live. I cannot imagine the heartache that my grandmother must have gone through.

I knew my Grandpa; he came to live with us when I was very young. I never got to meet my Grandma. She died when she was 47. My dad was only 17 at the time and he was in St Louis at the Jefferson Barracks, enlisted in the “CC Camp”  or Conservation Corps. In those days it was a way for young men to make money working on public lands; parks, etc. They built many cabins & lodges for the state and/or national parks.

With the money Dad sent home, Grandpa started a neighborhood grocery store in 1934 at 333 North Fountain Street. (The building has since burnt)

Here is a photo of my grandpa and my dad at the counter in the grocery store:

(If you click on the photo and then zoom in, you can actually read the labels on the shelves. You will recognize some of the products.) 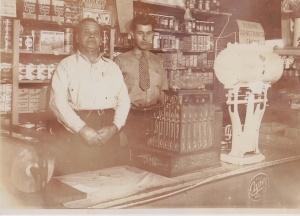 Something tells me that grandpa’s store might not pass today’s health standards. It looks like he probably wrapped raw meat on that paper in front of him. (gag)

The cash register is gorgeous.

My dad was impeccable in his grooming. He must have gotten that from his mother because, obviously, grandpa was not so well-groomed. My parents told me that grandpa thought that you shouldn’t wash your clothes too often because it would wear them out. He also thought that you shouldn’t take too many baths because it would make you weak. My mother being a clean freak, that just about made her crazy. She was always trying to get grandpa to take off his shirt so that she could wash it! LOL

He loved us so much though. And he spent lots of time with us. He would take me to his store & give me candy. I loved that, my mom didn’t.