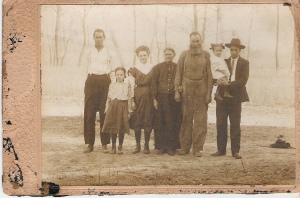 I promised in an earlier post to write about my great grandfather, Louis Calvin ‘Cal’ Yow. As you can see, he was a mountain of a man. He was of Irish or Scottish descent. He was born in Tishomingo County Mississippi. His father, Christopher Louis Yow was, (according to family legend passed down from my father, Raymond Yow), killed over politics and thrown into the Arkansas River at Helena, Arkansas. ( I could speculate on the reasons for that, but I won’t since I don’t know for sure).

Cal Yow was married to Sarah Elizabeth Cheek. They had 7 children. They came to Grand Tower, IL so that my great grandfather could find work. Grand Tower was a very growing community at the time. There were coal mining operations there, as well as an iron works. So many men came to work there that the hotels were all full and so they set up a ‘floating hotel’ which was a steamboat used as a hotel for the workers.

At some point, my great grandfather started working at a silica mine across the river near Grand Tower. Family stories differ on the exact details but I understand that my great grandfather went blind at an early age. A family history sent to me by a relative said that Cal Yow suffered from getting silica in his eyes at the mine. The silica would not have blinded him. He went to a doctor in St Louis who put drops in his eyes. They were the wrong drops and that is what blinded him.

Being blind, he was no longer able to work at the silica mine. In fact, the only work he could do was to go into the woods and chop wood. The lady I met in grand tower said that they were called “the cutters”. (The thought of a blind man with an axe scares me)

My grandfather, Tom Yow, started working in the woods with his father when he was 4 years old. He had to be the eyes for Cal Yow. My grandfather did not get an education because he was working with his father trying to keep the family going economically.(My grandmother, Mary Ann Tripp, was well-educated and she taught my grandfather how to read & write) There was no government help in those days for people with disabilities so they just had to manage the best they could.

My great grandmother, Sarah Cheek Yow, outlived her husband by 15 years. He died in 1915 when my father was an infant. She lived until 1930. I will write more about her later. She was a very intriguing figure in our family’s history.

Louis Calvin ‘Cal’ Yow died at my grandfather Tom Yow’s house at 542 South Hanover, in 1915 according to the obituary published at the time. I found out through my research that he was buried in a pauper’s grave at Fairmount Cemetery (not called that at the time). There was no grave marker but the sexton at Fairmount helped me to locate exactly where he is buried. (My brothers helped me to put a grave marker there, approximately 90 yrs after his death)

Here is a photo of the house at that location about 1o yrs ago. I am not sure if it is the same structure. As far as I know, it is.

Here is a copy of the obituary: (I found this on microfilm from the Southeast Missourian) 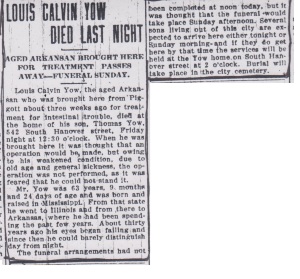