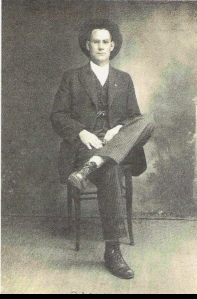 OK, all you ladies waiting to know more about this handsome man.

Thanks to my sister-in-law, I now have info on Lewis VanBuren Yow, one of my great-uncles. I really have very little information on him. I never met him since he died long before my father was even born. He was one of the sons of Louis Calvin ‘Cal’ Yow and Sarah Elizabeth Cheek Yow. He grew up in Grand Tower, IL, as did my grandfather, William Thomas ‘Tom’ Yow. Grand Tower is somewhat strange in that at some points in its history it was part of IL and in others it is shown as being a part of the state of Missouri. I think the issue had to do with the fact that it was literally almost IN the Mississippi River. There was a huge flood at some point in history (I can’t remember when), and they say that the river flowed backwards. ???? So I guess the community of Grand Tower was re-located by the Mississippi River. Sounds pretty weird to me. But, in any case, that is where my ancestors on my father’s side were born & raised.

I think Lewis VanBuren is an interesting figure because he was so tall, handsome, and well-dressed, especially compared to the rest of the Yow family (as you can clearly see in this photo)

(you can click on this photo to make it larger)

According to a newspaper article written at Lewis’ death, he was a “timber buyer”. It sounds like he may have gotten involved with the wood industry through his father, ‘Cal’, who was a wood-cutter. I am speculating on this. I have no documents or legends to prove or disprove this assumption.

I do know for sure that he was married to a woman named Rhoda, who had been previously married and had a daughter, Edith Barnett, from her first marriage. She & Lewis had 2 sons, Nathan & Kenneth Yow, and 2 daughters, Mary Nevada Yow & Fay Yow (Fay died when only 11 days old).

In the above photo, I don’t have all the names but Lewis VanBuren is on the left behind his wife, Rhoda. Sarah Elizabeth Cheek Yow, his mother (my great-grandmother) is in the center front row. Off to the right, behind the fence is Lewis’ and Rhoda’s son, Nathan. I believe this photo was taken in Marquand IL.

Lewis VanBuren Yow came to a tragic and sudden death at the age of 53 in a freak accident as described in this newspaper article:

You will need to click on this article, then CLICK ON IT AGAIN in order to be able to read it:

Too bad the date is not shown on this article but I know that it was in 1929 that he was killed. I have a photo of his & Rhoda’s grave marker located at Fairmount Cemetery in Cape Girardeau, MO, but the photo is not very clear. I have tried to clear the lettering and numbers up but not very successfully. Again, you will need to click on the image to enlarge it. Sorry it is so blurry. Can any one make out the sentiment at the bottom? Looks like “Our love…..???” endures? maybe. If I ever get back to Cape I must go see this stone again. If any of you readers can read it, please leave a comment or send me an email at darlayow@gmail.com 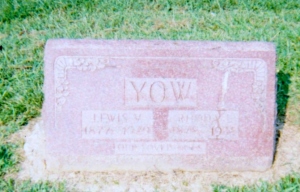 Most of the info I have on Lewis VanBuren came from my brother and also from Lewis’ grandson, Jesse Yow, from Marble Hill MO, now deceased.

There is a lot of history that is lost in the Yow family. My father, Raymond Yow, related a lot of the history to me, but it seemed the family was somehow alienated from one another and my father did not want to pass on some of the unpleasant details. Maybe that is for the best.